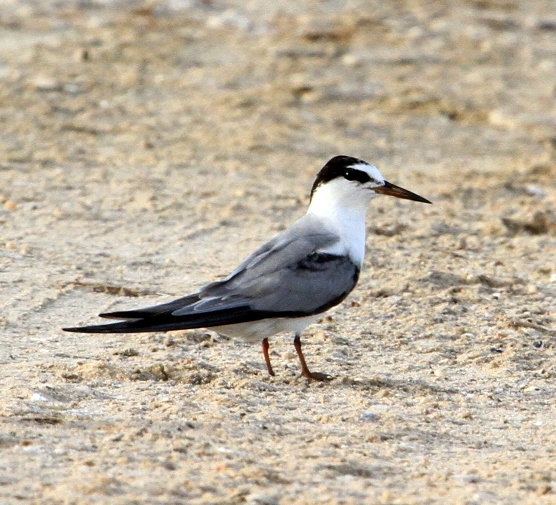 In Sandgrouse 38 (2016) 118-123 Mohamed Habib reports in detail on his survey of Little Tern Sternula albifrons colonies including behavioural aspects at Port Said, Egypt. His report has been illustrated with a set of very interesting photographs of the species breeding behaviour and adaptation to the harsh climate such as cooling chicks by covering them with water by means of  soaked  belly feathers. From the pictures it appeared that the Little Terns of Port Said had an unusually dark plumage compared to the little Terns from Europe.

At my request Mr.Habib visited the colonies near Port Said again in order to trap, measure, collecting some feathers  and to photograph breeding  Little Terns. See results table 1 and 2.

If our eyes do not deceive us the eyes of Port Said Little are slightly bigger in diameter than the eyes of NW European Little Terns. If this is correct it may be an adaptation to the shorter days in Egypt during the breeding season with only 14 hours and 10 minutes of daylight on 21st June compared to  16 hours and 42 minutes  in Rotterdam at the same day. Bigger eyes may help the terns to keep on fishing after dusk. See results table 3.

The eggs in Egypt are somewhat duller, more brown coloured than in NW Europe the latter are paler and better adapted to the typical sandy beaches.

The same is true for downy chicks from Port Said ,  more vividly coloured  and less ‘blond’than their European counterparts

Among North Sea Little Terns a copulation goes hand in hand with presenting food. No food, no copulation! While mounting his partner the male lets the Sandeel gently touch the back of the female to  stimulate her, while copulating she may eat the fish at the same time. In the picture of the Port Said Little Tern copulation there is no fish to be seen.

Vaurie,1965, mentioned only two races for the Little Tern occurring in the Western Palearctic i.c. nominate albifrons and far eastern sinensis. C.S.Roselaar in Cramp, 1985  notes small differences in size of nominate to the southern part of it’s range but other than that supports Vaurie as far as 2 races for the Western Palearctic are concerned, Malling Olsen c.s. too accept  only two races for the WP. Clearly these authors have not been in the  position to see the the very dark little Terns of northern Egypt in particular the breeding birds of the Port Said area.

DNA samples of both Port Said Little Terns as well as Little Terns from the North Sea area (The Netherlands) have been send to Prof.Jon M.Collinson ,University of Aberdeen,Scotland for further analyses.

I thank the Foundation Voorne Bird Observatory and Lars Lachmann for their assistence.